WizKids has just made an important announcement about Dice Masters!  We suspected that rotation would eventually happen and now it is official.  Starting on June 1, 2017, there will be two formats for Dice Masters – Golden Age and Modern Age.  They also announced that Half-Elf Bard: Master Lords’ Alliance is banned from Modern Age events.

We think this is great for new players, because you won’t have to chase down those elusive older cards that are hard to find just to play competitively.  Overall the game has become more balanced with the newer sets and we are having a ton of fun playing with the newer sets in our weekly events. We’ve also noticed that a number of the action cards in the new sets – Teenage Mutant Ninja Turtles On the Halfshell and Iron-man/Warmachine Starter Set – are the same as some of the soon-to-be Golden Age cards, so veterans will still get to use many of their favorite actions in the new format.

Read the full announcement and get all the details here: http://wizkids.com/dicemasters/dice-masters-rotation-faq/

We will be announcing next month’s Dice Masters events later this week so watch our store calendar for the upcoming goodness!  Stop by this evening for a “Same Cost Constructed Event” or join the Chaos on Friday in our Marvelous Chaos Rainbow Draft.

If you want to find out more about Dice Masters, come to a free learn to play and casual meetup, every Saturday at 10:30 am.  We’ll even let you take a team home with you!

There is lots to look forwards to in February if you are a Dice Masters player!  WizKids is putting out 2 new products:

Teenage Mutant Ninja Turtles Heroes in a Half Shell Box set comes out on February 8, and has everything needed for up to 4 players

The Iron Man and War Machine Starter set will bring 8 new character versions and new Iron Man armor never before seen in Dice Masters.  This is a great intro point, having everything needed for 2 players to learn the game and face off.

We also have a lot of great events, continuing our tradition of playing most Wednesdays and Sundays, with casual and learn to play every Saturday morning at 10:30am and Friday Night Dice the last week of the month.

Click here to see a summary of February’s events, and see our Meetup site for all the details! 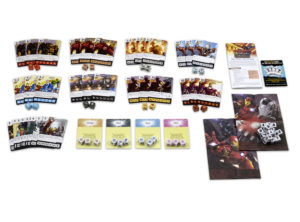