Citadels – a classic game from Fantasy Flight Games – is being updated!  Read on to find out more about this game and why it deserves a place in your game collection!

Citadels has been one of our favorite light strategy games for quite a while.  Originally released in 2000 and designed by renowned Bruno Faidutti (Ad Astra, Mission Red Planet, Incan Gold), it is currently on its 2nd edition with -TWO- new versions on the way.  In Citadels, players take on new roles each round to represent characters they hire in order to help them acquire gold and erect buildings. The game ends at the close of a round in which a player erects his/her eighth building. Players then tally their points, and the player with the highest score wins.

Will you be the merchant to maximize your revenue?  Or will you be the thief who gains riches by robbing another player?  Will you risk taking the architect, knowing he will be in the assassin’s sights?  Fortunately, you can change your mind every round, and guessing what other players are going to do can make or break your ability to be the first one to build your 8 districts, ending the game!  The current version includes 8 characters from the original version and 9 additional characters that were released in an expansion.

Why We Love Citadels

At last count, we’ve played Citadels at least 30 times – yeah, it’s that good!  Here are some of the aspects of the game we love:

Click here for an overview of the game play and components.

Two new versions are “on the boat” and will be on the shelves at Meeples Games by Christmas.  The first – Citadels Classic – is a return to the art and content of the original, and will sell for $12.99, making it a great stocking stuffer for anyone.  The other new version will include even more characters to go with all previously released characters, and all new art on the cards, and will retail for $29.99.

We wanted to give everyone a heads up because the current version 2.0 won’t be available much longer (and we just LOVE the art so definitely check that out before it’s gone forever).  You can check out the rules here.  As always, Meeples Games is happy to save you a copy when you are ready to pick one up, so just give us a call or stop in to check out Citadels!

Parental note:  Some people have found the art on 2 of the cards from the current version to be inappropriate for younger kids, and the theme may include murder if you use the original characters, so review and substitute the expansion cards as needed if playing with kids. 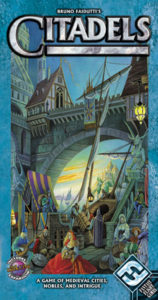