It’s the time of year for family get-togethers.  Grandma, Aunt Sue, Cousin Joe and the kids are all coming over for a fun-filled holiday weekend.  How do you entertain everyone?  Here’s a list of great family get-together games that are easy to learn, play lots of people and are super fun.

You can pick up all of these games at Meeples Games!

Telestrations is a hilarious combination of the childhood game Telephone and the drawing game Pictionary.  You don’t have to be an artist to draw and guess these simple ideas.  But, how did ‘sack lunch’ become ‘man purse’??

America is an All-American trivia game in which you either know the answer or bet that others don’t.  Each round three questions – one with a year, one with a state and one with a number – are available for one topic.  It could be The Brady Bunch or Baseball or Cheeseburgers!  Players place tokens on the right answer or what they think is close to the right answer or bet that other’s don’t know the answer at all.  The cards have full color clues to help you, as well as interesting factoids for every question in the game. With almost one thousand questions covering more than three hundred topics, America will be a favorite for family and friends for a long time!

America supports six players and takes about an hour! 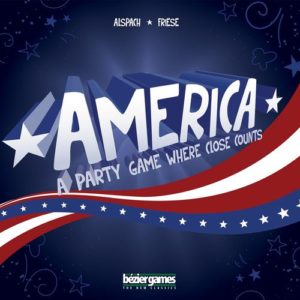 Spot It! is a simple pattern recognition game in which players try to find an image shown on two cards.

Each card in Spot it! features eight different symbols, with the symbols varying in size from one card to the next. Any two cards have exactly one symbol in common. For the basic Spot it! game, reveal one card, then another. Whoever spots the symbol in common on both cards claims the first card, then another card is revealed for players to search, and so on. Whoever has collected the most cards when the 55-card deck runs out wins!

Sounds easy and it is, but it’s also super competitive!  How fast are you?  What crazy names have you come up with for the items?  How fast can you go through the entire deck on your own?  With many different versions ranging from Pre-school to NHL to Camping to FAO Schwartz, Spot It! will be a family favorite!

Spot it! supports six players and plays in five minutes! 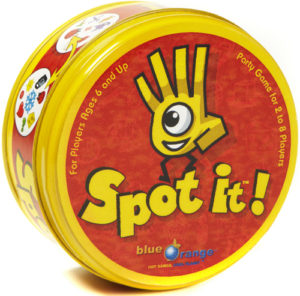 Codenames – Two rival spymasters know the secret identities of 25 agents. Their teammates know the agents only by their CODENAMES.  Two teams compete to see who can make contact with all of their agents first. Spymasters give one-word clues that can point to multiple words on the board. Their teammates try to guess words of the right color while avoiding those that belong to the opposing team. And everyone wants to avoid the assassin.

Codenames plays up to 10 people and plays in 15 minutes!  Codenames also comes in Disney Family, Duels (2-player), Pictures and Marvel! 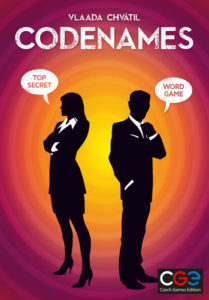 Incan Gold is a quick, fun and tense game in which you and other adventurers explore an old Incan temple in search of gold and treasure. In each of the five rounds, you secretly choose if you want to continue exploring the temple in search of more treasure or retreat to the safety of your camp with your share of the treasure that has been discovered so far.

King of Tokyo, you play mutant monsters, gigantic robots, and strange aliens—all of whom are destroying Tokyo and whacking each other in order to become the one and only King of Tokyo.  This game is sort of ‘monster Yahtzee’ and is fun for all ages.  Will you stay in Tokyo or force another player to take your place? 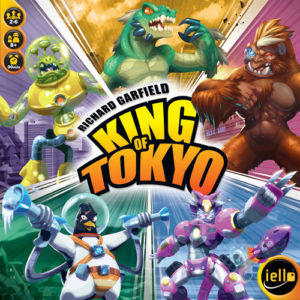 Happy Salmon is a simple, ultra-fast, very silly card game.  It’s the perfect game to occupy the kids and cousins before dinner and an excellent way to make room for dessert after the meal.  Run around a little bit, laugh your butt of and have a great time!

There are no turns. Players call out the action shown on their cards as fast as they can. When two players have a match, they celebrate by performing the action. Actions include the classic “High 5”, the unifying “Pound It”, the frantic “Switcheroo”, and the delightful and bizarre “Happy Salmon”.

Happy Salmon supports six players (or combine a Green and Blue set for 12!) and plays in two minutes! 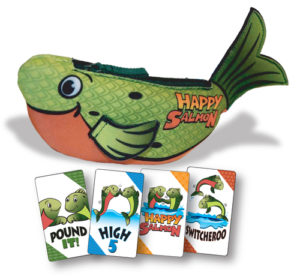 The Great Dalmuti is a simple card game where players vie to become the Great Dalmuti and not the Greater Peon.  It’s fun, fast-paced and since there isn’t an end-of-game winner, players can drop in and out during the game.  That makes it a perfect game for family get-togethers!

The Great Dalmuti supports up to 10 players and each round takes 10-15 minutes! 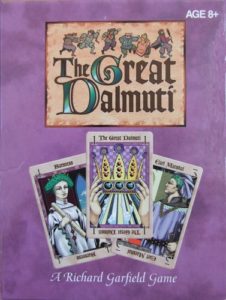 Ticket to Ride is an elegantly simple game that can be learned in under 15 minutes, while providing players with intense strategic and tactical decisions every turn. Players collect cards of various types of train cars they then use to claim railway routes in North America. The longer the routes, the more points they earn. Additional points come to those who fulfill Destination Tickets – goal cards that connect distant cities; and to the player who builds the longest continuous route.

Ticket to Ride supports up to five players and comes in many varieties including US, Europe, Germany,Norway and the new Rails & Sails! 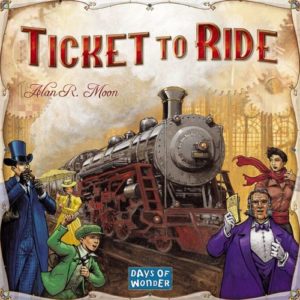