Licensing and Equipment and West Seattle Blog, Oh My!

I feel a little remiss about posting.  Promise to do better.  But when it rains, it pours so hold on to your hats, cuz the train is moving pretty fast now!

It’s been a busy week, here are some of the highlights:

Spent some time on Craigslist and got another bunch of equipment for the kitchen including a Hobart refrigerator, a deli station / refrigerator, an espresso grinder, a panini press, a double soup warmer thingie, and a stainless steel prep table.  Awesome!  I am about half way there on getting the necessary kitchen equipment.  Yay!

I also lined up Seattle Espresso Repair to service my espresso machine.  I bought it used and want to make sure it works and is in great shape for when we’ll set it up.  Rick Cox was super nice and I’m looking forward to him being my ‘guy’ for keeping the espresso flowing!

The building permit is moving through it’s paces.  It’s still going to be some weeks before it is approved, but the city provides a nifty site so you can keep track of where it is in the process.  Unfortunately they have a big disclaimer about how swamped they are and that things are backed up.  It would be great if it were approved early, but it doesn’t look likely.  Fingers crossed.

The health department approved the permit for the kitchen – Yay!

The liquor license is in process.  Wow, so many documents and requirements!  Seriously, I just scanned ten signed documents to send them along with plans and lease.  It’s a ton of paperwork!  But we have the public posting up on the door and I’m sending in the paperwork today.  Hopefully that will be approved soon so I can move on with the distributor. 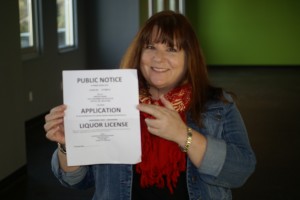 Yesterday I met with Tracy from the West Seattle Blog.  She came by the store and chatted with me about the store.  She’s going to do a little story about us!  If you haven’t checked out the blog you should.  She does a great job of keeping West Seattle informed about traffic, new construction, city planning, events, happenings, etc.  If it’s going on in WS, Tracy is all over it!

And speaking of the WSBlog, I attended the West Seattle Chamber of Commerce meeting yesterday where the topic was the proposed minimum wage increase.  They had a nice panel discussion which was recorded and posted to the blog here.

International Tabletop Day is April 5 this year.  The store won’t be open yet, but we’re planning an event and will keep you posted!