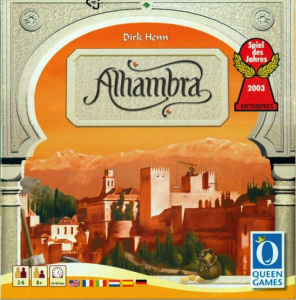 One of the “gateway games” at the beginning of my tabletop gaming obsession was Carcassonne.  I was captivated by the idea of getting to build a different “map” every game simply by placing pretty tiles to create cities, roads, and more.  At the end of the game, everyone–win or lose–got to step back a bit from the table and enjoy the new landscape we had created.

When I heard about a similar tile-laying mechanic in Alhambra, I was intrigued.  The biggest difference here was that each player would build her own “map” (here, in the form of a palace) with the tiles.  Now I was definitely excited.  It’s always a blast to get to build on my own in a game, and in Alhambra, that would be the heart of the game!

In Alhambra, players work toward completing the most impressive palace.  To do this, the players work with two common boards–one containing the tiles with buildings for these palaces and a second with cards representing money in four currencies.   Each turn, players have a choice:  either take money cards or buy (and potentially place) buildings for their palace.  Taking money is pretty straightforward, as players choose a card in a particular color of currency.  In games I’ve played, this can actually be tricky as I look ahead to building tiles I want for sale in a particular currency color.  The building tile board, on the other hand, is a bit more involved.  During the course of a game, tiles will be placed on this board in four slots, each associated with a currency color.  If a player decides to buy a building tile, she pays money cards to the bank in the matching currency and can then place the tile in her palace.  If she pays exact change, she can perform an extra action (this can be pretty powerful in this game!).

Using these tiles to build the palace is half the fun.  While most buildings simply represent one of several “suits” used for scoring majorities at various times in the game, many tiles also have “walls” along one or more edges of the tile.  As players place the tiles into their palaces, they aim to build the longest continuous wall they can to score bonus points.  However, in the process of doing so, the wall also cuts off areas for potential expansion of the palace, so players must be careful not to box themselves in (yes, this comes from personal experience!).

Alhambra rewards players who can balance a little long-term strategy with a lot of on-the-fly decision making based on what’s available.  This keeps the game fast and fun.  In addition, Alhambra is a classic Euro-game with simple rules, tense but fun choices, and a small set of clever mechanics.  But the key thing that sets games like this apart for me is the sense of accomplishment they provide.  Here, I have a pretty little “palace” to show for my efforts–and it did take some effort to make it happen. At the end of the game, I have built something, and this keeps me coming back for more