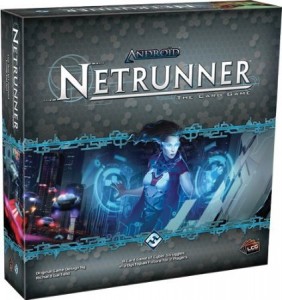 Powerful mega-corporations and resourceful hackers. In an all too plausible dystopian future, these two sides struggle against each other for power and fame in the incredibly polished game, Android: Netrunner. Published by Fantasy Flight Games and based loosely on the board game Android and the now-defunct collectible card game, Netrunner, Android: Netrunner is a Living Card Game (or LCG) that pits two players head to head in a fast paced, highly strategic back and forth of digital chess.

Before I jump further into the game though, a few notes about me. I’m mostly a board gamer. I’ve played a few CCG’s in the past and I have a long, loving history with RPG’s. But the Living Card Game concept was new to me and appealed to me primarily for monetary reasons. Unlike CCG’s there are no ‘rare’ cards, no randomized booster packs. Everyone constructs their decks from the same sets of cards, either the Core Set, one of the expansions or one of the ‘Data Packs’, all of which contain the same cards. The LCG concept means that everyone can come in on a level playing field with the cards they have access to. I have to admit that I’m quickly becoming a fan of the LCG concept.

Android: Netrunner is unusual in that it is an asymmetrical game. Unlike most games where each player plays by the same set of rules and game mechanics, here, you take on the role of either a Corporation or a Runner, each of which has a distinct setup and play style. Typically, each game lasts around 30-45 minutes. There are a number of Corporations and Runners each player can choose from. They can then construct a deck built around the specific strengths of those identities. Again, each player has a slightly different play style. The Corporation wants to win agenda cards from their own deck, which cost time and money to score. The runner wants to intercept those cards and claim them for himself.

The primary game play mechanism comes from the Runner making ‘runs’ against various corporate servers, often agenda cards played face down by the Corporation. Obstructing him are various pieces of Ice, defensive software that the Corporation plays to protect his assets. The Runner also has tools – Programs and Hardware that allow him to hopefully bypass the Ice and get deep inside the digital infrastructure of the Corporation. Once past the defenses, the Runner has the chance to steal the information and possibly the agenda points from the Corporation. The first player to score 7 points worth of agendas, wins.

Like many Fantasy Flight games, this has a high initial learning curve. Be prepared to either have someone teach you the game or be willing to do a few walk through runs with someone without worrying who won. If you can get past that first hump though, you’ll find that Android: Netrunner is a highly rewarding game with a wonderful, evolving theme, satisfying game mechanics and a frankly unreal amount of re-playability. The game is well balanced and due to the expansions and Data Packs, always growing.