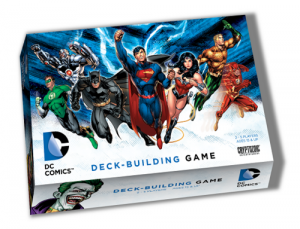 This is one of my favorite deck builders.  It’s a fun, quick play with a fair amount of player interaction and a great theme.  The comic theme is well integrated with heroes, villains, super powers and locations that are all part of the DC universe.

The art on the cards is really great using the look from the comics.  We don’t have the cards sleeved because there are so many, but it probably wouldn’t be a bad idea if you were going to play a lot.

The rules are short and easy to figure out.  This game is pretty light and you can be playing in about 15 minutes including set up.

The goal of the game is to amass the most victory points based on the values of the cards in your final deck.  The higher the victory point value of the card, the more ‘power’ it costs to get it.  Super Villains are the highest value.

Each player is a Super Hero and gets that hero’s super power to use during the game.  You can be Batman and get bonuses for equipment, or you can be The Flash and get to draw an additional card each time you get to draw, etc.  Each Hero has their own special talent.  I’ve been Batman several times in a row and it never fails that the person to my right buys all the equipment cards!  On purpose??

The big money points are in the Super Villains that the players are working to defeat.  The first is always Ra’s Al Ghul (how do you pronounce this? There has been contention…) When the eighth Super Villain has been defeated the game is over and the Heroes add up their points.

Each player starts with a deck of ten cards – seven Punches and three Vulnerabilities.  On your turn you play cards from your hand of five and add up the power to buy new cards from the lineup.  So, if my first hand is 3 punches and 2 vulnerabilities I’ll play the 3 punches (Pow! Cablam! Zowie!) and pick up Kid Flash from the five card lineup for 2 power. Kid Flash allows you to draw a card when played and is a good card to have in your deck.  As with all deck building games, when your draw pile is exhausted, you shuffle your discard pile and start over.  Now Kid Flash will be in my deck and I’ll get to play it.

I love this game!  While other games have more elements or multitudes of expansions, I love that this game is easy to teach, has a fast setup and playtime, has great art with awesome comic icons, and always leads to lots of fun player interaction and table talk.  I have the Marvel deck building game Legendary and I don’t enjoy it nearly as much.  Get this game now.  You’ll like it!