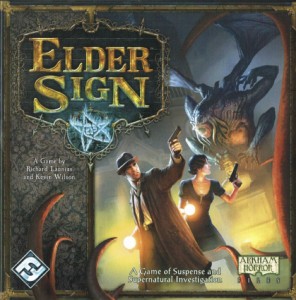 About 3 years ago, my neighbor sat me down to a game called Arkham Horror.  I hadn’t played much of anything in the board-gaming world at that point.  His kitchen table was strewn with game goodness–a huge board, countless decks of cards, piles of tokens.  It all seemed overwhelming.  He walked me through the basics, and as we played through the game, something clicked.  This wasn’t a game so much as an experience in a box.  It was storytelling.  Then we didn’t play Arkham Horror again for almost a year.  It was such a massive undertaking!  We had to plan for hours of setup, playtime, rules review, etc.  As much as Arkham gave me the gaming bug, it was a rare experience.

Enter Elder Sign.  This game promised a taste of the Arkham Horror experience in a fraction of the time, so my neighbor and I grabbed a copy as soon as we could.  Thankfully, it delivered! Players take on the role of investigators cooperating to close away an impending doom in the form of an Ancient One from H.P. Lovecraft’s horror stories.   It all begins with the beautiful components.  Oversized Adventure Cards represent locations in a museum where odd happenings foretell the coming of the Ancient One.  These cards feature high-quality art that brings out the Lovecraftian flavor well.  Other cards represent items, allies, or other bonuses players might acquire.  The cardboard tokens are  a bit small for the constant handling they require during the game, but they do the job nicely.  At the heart of the game are the custom  dice.  Thankfully these are high-quality, with engraved symbols that are easy to see from anywhere around the table.

During the game, players take turns moving to the various Adventure Cards and rolling dice in an effort to complete an adventure.  In doing so, players attempt to roll a combination of symbols on the dice to match those displayed on the Adventure Card.  A player may roll as often as he or she wishes, but each time the roll fails to complete a task, the player must discard a die from the available pool.  Thanks to item cards a player may have acquired on previous turns, extra dice might be available to add to the dice pool.  Here is where some of the most tense and exciting experiences in the game occur.  Many times, as I’ve attempted to complete an adventure, I’ve been faced with the choice of using up an item to add a bonus die that just might give me a symbol I desperately need–but it just might not!  Other times, I might have to choose when to use special reroll tokens or when to use an item to save a die for another player.   In the end, players receive rewards for completing an Adventure Card or suffer setbacks for failing.

Throughout the game, this unique mix of push-your-luck and adjusting your plans to get the job done continues as the Ancient One approaches.  A fantastic clock dial advances the game time after each turn, and a special event happens each time the clock strikes twelve.  Doom tokens continue to be added to a card representing the particular Ancient One players are fighting, monsters appear, and players strive to stay alive and sane in the process.  The group wins if they can close away the Ancient One.

While Elder Sign succeeds at providing a fast-paced, light taste of its big brother, Arkham Horror, it does sacrifice some of the story-telling and role-playing of the board game.  Due to the fact that players complete adventures with symbols on dice, some of the experience of fighting an Ancient One is a bit abstracted.  At the same time, I have gotten to play Elder Sign well over a dozen times in the last year, and I’ve only gotten to Arkham Horror once!  Elder Sign does use the dice-rolling well to bring out the thrill and tension of battling against supernatural forces, and the ever-changing Adventure Cards provide a lot of variety from game to game.