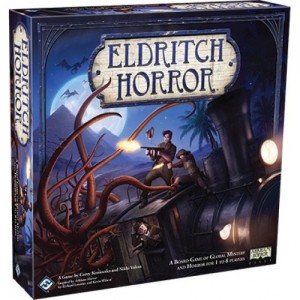 You’re an investigator in a world gone insane. Mysteries abound, and dark clues are everywhere. Ghouls, cultists, and a variety of tentacled horrors are only a prelude to the coming of something so vast, so terrible, it may well auger the end of time. Can your ragtag team of investigators put an end to the madness? The fate of humanity rests in your hands.

Sound familiar? If you’re a fan of Lovecraft cardboard, it will. Eldritch Horror is Fantasy Flight’s latest excursion into the Lovecraftian universe; veterans of Arkham Horror, Elder Sign, and Mansions of Madness will feel right at home. Many of the characters, monsters, and items are the same, and the mechanics are also very similar. The basic gameplay involves building a character’s strengths and assets, and then completing a set number of missions before the Doom Track timer runs out. There are encounters to have, gates to close, and monsters to kill; you must cooperate with other players to stop your chosen Ancient One from breaking into this world before time runs out.

In fact, I’m tempted to describe it as “Arkham Horror Lite.” It’s a quicker,  sleeker game than its big brother; the rules aren’t quite so involved, the turns are simplified, and everything just feels more streamlined. It’s still not a short game– with two, it takes at least 90 minutes, and that’s for being promptly Devoured– but it’s not nearly as long and involved as an extended session of AH.  The learning curve for new players isn’t bad and the quick reference guide is very good. The artwork is of the same high quality of the other Fantasy Flight Lovecraft titles, and the bits are all sturdy and well-crafted, as you’d expect.

There are a few nice additions to the familiar mechanics. For instance, when you gain a Condition card, there are a variety of surprise effects printed on the back of each one. You’re not allowed to peek; you don’t know beforehand what sort of effect your particular card may have until you’re compelled to flip it. There are surprise debts, curses, and deals, and even your usual combat spellcasting can cost you dearly.  All the new unknowns add extra richness and suspense, and they’re a lot of fun to roleplay.

The game is not without problems. The combat system is a bit odd; it seems like one of those simplification ideas that didn’t really simplify anything. It’s still dice-rolling with horror and strength checks against the individual monster’s stats, but there’s a strange simultaneous back-and-forth damage system that isn’t exactly intuitive. Also, the story feels a bit cursory in spots; while satisfying overall, some of the adventure scenarios aren’t as deeply envisioned as they are in Arkham Horror, even feeling a bit pasted-on at times. The theme also leans more noir than Lovecraft, but that’s not entirely unpleasant; this game is all about the globetrotting, and even if it conjures more Maltese Falcon and less Dunwich Horror, it works.

It’s a great game to roleplay. The upside to the brevity of  some of the flavor text is that it’s easy to get into the story without really slowing down the gameplay. In fact,  you’ll get twice as much out of this game with a group who enjoys delivering the narrative aspects of it with proper Lovecraftian embellishments, melodramatic voices, and even the occasional scream of mortal terror.

Overall, this is a great game that deserves its ratings. It’s different enough from the other Fantasy Flight Lovecraft titles to be exciting, yet it’s consistent enough to please hardcore fans. It is challenging– my husband and I have lost more games than we’ve won– but, hey, that’s just part of the package when you’re fighting unfathomable interdimensional evil, right? Sometimes you win; and sometimes you, along with every other living being on the planet, are devoured by giant godlike creatures from beyond all time and space.

Game on, Cthulhu. We’re ready for you this time.