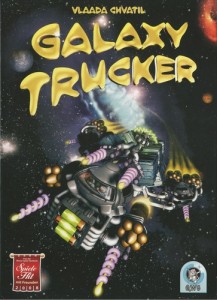 Galaxy Trucker is Brian’s game, which he has had for six months or so and we just got around to playing it. I realize it’s been out since 2007, but there are so many games – don’t judge me! It’s published by Czech Games / Rio Grande – the same company publishing Tzolk’in: the Mayan Calendar (which we also love!) and Space Alert.  It’s also the same designer – Vlaada Chvátil.  Every game of his we’ve played has been good.

First, I would like to say that I am terrible at this game. I know, right? I should be good at it because I’m a fairly spatial thinker (maybe not??), but the building phase takes me forever. But I love it and want to play it again and again. Practice makes perfect, right?

The premise is that you are a contract hire pilot for Corporation Incorporated, a company that ships building materials to colonies on the periphery of the galaxy. You have been hired to build a ship from prefabricated parts and deliver your cargo to the Periphery. Any profits are yours to keep and there are bonuses for speedy delivery. But the trip is hazardous and you have to watch out for meteor attacks, alien invasions and space debris. The better built your ship, the safer your trip will be.

The components of the game are really nice. The tiles are a good size, the graphics are nice and the theme is well integrated. I especially love the resource tokens – little spaceman heads for crew and aliens, cubes for cargo and little green gems for batteries. The only thing I don’t like is that the battery gems are really small which makes them hard to pick up. That’s super nit-picky though and overall the bits are great.

I really like the ‘first play’ directions. They walk you through building your first ship with no information about what comes next. It makes learning the game easy because at first you are only concerned about building your ship and the whole ‘surviving the flight and delivering your cargo in one piece’ thing isn’t even mentioned.

One of my favorite things about this game is that it makes a concession for the first time player getting in on a game with veterans. I’ve never seen this before and it’s really nice. What happens is that the first time player builds his ship and then swaps his with someone who has played before. This way the new player isn’t behind from the start and they get to play with a (hopefully) well constructed ship.

Phase one is all about selecting tiles and building your ship. This is both fun and stressful because it’s a race. The first player to finish has advantages in phase two. Each tile has connectors that must line up properly. After the ship building phase players check each other’s ships for mistakes and you have to remove parts until everything is legal. Check your ships people cuz losing your cannons really blows.

During phase two you fly to your destination hoping to pick up some cargo along the way and arrive in one piece. Not easy.  Cards selected at random are revealed one at a time and could be anything from meteors which you can shoot down with your cannons, ways to pick up cargo, abandoned ships to explore, etc.  When you reach your destination you can sell the cargo you managed to acquire and hang on to for Space Bucks.

Three rounds are played each starting with a larger ship.  By the last round your ship is pretty big and complex, but there are more cards with a greater possibility of disaster.

The winner is the one with the most Space Bucks at the end.

This game is fun and plays fast. Both casual and serious gamers we know like this game.  I like the multi phase aspect and the difficulty level. I’m terrible at it, but I love it!