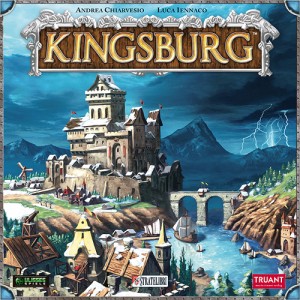 My Love-Hate Relationship with Kingsburg

It’s been love-hate since the beginning with Kingsburg.  Every time I finish a game I say I hate it and I never want to play again.  Every time I see the box I say ooooh Kingsburg, who wants to play!?!?  I can’t quit it.

Kingsburg is a worker placement game that uses dice as the workers.  The game takes place over 5 years, with 4 seasons where the main action is.  The first 3 seasons are the influence phases, and the 4th season is the fight phase.  The board has 18 numbered characters starting with 1, The Court Jester, and going up to 18, The King.  Each character provides you with a benefit, and as the numbers go up, the benefits get better.  The artwork of the characters is beautiful, and is one of the things that I love about the game.

Here’s how the action works:

All players roll their 3 dice.  Then players line up their dice pools in order from the lowest to highest total.  The person with the lowest total goes first.  The player chooses from 1 to 3 of their dice, and places them on one of the characters (“influence”), matching the total on the dice to the number of the character.  Then the next player takes from 1 to 3 of their dice, and places them on a character not already chosen.  Continue in turn until everyone has used up all their dice.  It’s up to you whether you want to use all 3 dice together to reach a higher numbered character with a big benefit, or split them up and get smaller, multiple benefits.  But remember, you can’t take a character that someone already has, so you can end up with dice you can’t use.  You should also try to place your dice in such a way as to block other players from using their dice.  The dice-placing-and-blocking mechanic is the defining characteristic of Kingsburg, and what really makes it special.  It’s the thing I love most about Kingsburg.

After everyone has placed their dice, players start with The Court Jester, and go in increasing character order taking their benefits.  The benefits are combinations of resources (gold, wood, and stone, used to build buildings), victory points (tracked around the outside of the board), +2 die tokens (used to buff your dice rolls), military strength (used in the winter fight phase), and the “pink ghost” (used to peek at the enemy for the winter fight phase).

After spring, summer and fall, you build buildings.  Each player has their own board in front of them with the available buildings.  The base game has 5 rows of buildings in 4 columns each.  To build a building, pay the resource cost (for example, 1 stone and 1 wood), and place your building marker on it.  Each building gives you a benefit, such as military strength, victory points, or extra dice.  The buildings in each row are related, and increase in victory points and benefits as you move to the right.  You must build each row starting at the left.  Choosing different buildings lets you experiment with different strategies and powers.  This is how you customize the game for yourself.  But be warned: one of the penalties for losing the winter fight can be to lose your most valuable building, and the victory points it gave you.  This has happened to me multiple times, and is extremely painful.  This is one of the things that I hate about Kingsburg.  However, losing a building is not a death sentence.  I lost a building in my last game, but still went on to win.

In winter you fight an enemy, randomly determined at the start of the game.  The strength of the enemies increases as the years go on, starting with strength 2-4 in year 1, and ending with strength 7-9 in year 5.  First collect up your military strength.  In addition to your shields and buildings, one player rolls a die and all players add this number to their strength.  Then turn over the enemy card and check its strength.  Each player must beat this number to defeat the enemy.  Defeat him and you get the benefit on the card (VPs, resources), lose and you suffer the consequences on the card (lose resources, lose buildings).  If you tie, nothing happens.  Also, the toughest player in each fight gets an extra victory point.

After the last fight in the last winter in year 5, the game is over.  The winner is the player who is the furthest along on the victory point track.  That’s it, and I find it to be very anticlimactic.  This is one of the things I hate about the game.  I’m used to counting victory points for 5 minutes, and having at least some suspense about who won.  In Kingsburg you just look down at the track and that’s it.  Notice that this is not really a defect of the game, just a personal gripe, and it hasn’t stopped me from still wanting to play every time I see the box.

A:  Well, there is a building that gives you a 4th die.

Q:  So only 3 dice without the building?

A:  Okay, if you have fewer buildings than anyone else at the start of spring, you can have a 4th die for spring only.

Q:  Do I have to match the number of the character exactly?

A:  You can use your +2 die tokens to adjust your total.  Careful though, you can only use one token per season.

Q:  So without +2 die tokens, do I have to match the number of the character exactly?

A:  There is a building that lets you go up +1 or down -1 from your total.  Careful though, you can only use this building once per season.  Also, this can cause some serious analysis-paralysis.

Q:  Only one player per character, per season?

A:  If you have fewer buildings than anyone else at the start of fall, the king will give you a special token.  You can use the token to influence the same character as another player.

Q:  How many buildings can I build after each season?

A:  Only 1 building, and only after spring, summer and fall.  Not after winter.

A:  Okay, if you have fewer buildings than anyone else at the start of fall, the king will give you a special token.  You can use the token to build 2 buildings at once.

Q:  Fighting seems tough.  How can I prepare?

A:  Try to visit military advisers, build military buildings, and peek at the enemy card.  As a last resort, at the start of winter you can trade resources for extra military strength.

Q:  Is there really nothing to count up at the end?

A:  Well, there is a building that give you extra victory points at the end, but I haven’t seen anyone build it in our games.

Q:  If I tie the enemy, do I really get nothing?

A:  First of all, be grateful you didn’t lose a building, you ungrateful wretch.  Next, there’s a building you can build that lets you win ties.

Q:  You only mentioned The Court Jester and The King.  Who else is there?

A:  Well, you’ll have to play the game to see all 18 characters, but here are some of my favorites:

17:  THE QUEEN:  Get 2 resources of your choice, and 3 victory points, and as if that wasn’t enough, peek at the enemy deck.