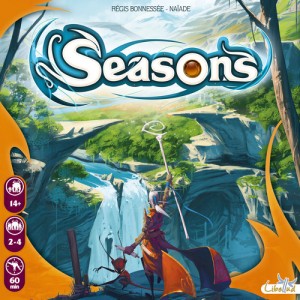 I got Seasons for Christmas this year and couldn’t wait to play it.  Brian and I broke it out the weekend after New Year’s and played two games the first of which was our learning-to-play game.  I won the first game and he killed me in the second!  Rematch, Brian?

You are a sorcerer competing with the other wizards in the kingdom in the Tournament of the 12 Seasons, which takes place over three years.  The winner will be the Archmage of the kingdom.  Fun!

The components of the game are beautiful and well made, although the cards were a little on the thin side.  The dice are really cool (four different color sets of 5 dice each) with icons that are clear and easy to read. The graphics on the cards are amazing and a little funny.  We sleeved the cards right away.  I’m not super neurotic about card sleeves, but these seem like they will get a lot of use and the sleeved cards fit in the box (super important to me!)

I’ve read some other reviews saying that this game has a steep learning curve, but I didn’t experience that.  After about 15 minutes of set up and rules reading we were playing. The rules were clear and nicely laid out.  We were able to find the answers to questions easily and the descriptions of the individual cards were very helpful.  Each card is numbered so looking them up was a breeze.  We figured it out in the first few rounds and were playing like pros by the end of the first game.  I think the complexity comes in with deeper strategy and the advanced spell cards.  There’s a lot going on with fairly simple rules.  I love this type of game.

For our first game we used the suggested starting set of spell cards.  I love games that start you out this way.  The cards for this first play-through are simple and diverse taking the player through the mechanics of the game and samples of most of the card types.  Seasons has both basic and advanced spell cards, and in our second game we used the basic spell cards – next time we plan to use the whole deck and see what we get!

The game play happens in two phases.  Phase one is the card draft similar to 7 Wonders. Each player is dealt nine cards.  Players choose one card from this set and pass the stack to the player on their left.  They choose a card from the set they were passed and continue the process until all of the cards are taken and each player has nine cards.  Players then organize their cards into three stacks of three indicating which stack is for which year.  I really like this part – choosing which cards that will help you more in the third year and which in the first takes some thought and understanding of the cards.

Phase two begins the main play of the game.  You work through three years month by month and season by season; rolling season die, gathering resources, selling resources and playing spell cards to gather victory points (crystals).  This part is super fun as you get to battle your competitors for resources, adjust your strategy when you don’t get the die you want, play cards that help you or hurt your opponents.  Like many resource management games you have to think ahead several moves and watch the calendar wheel to make sure you don’t miss your chance to transmute your energy tokens (convert resources to victory points.)

The only thing I can say negatively about this game is its lack of social interaction.  Maybe the advanced spell cards will provide more opportunity for this – we will update this post after we’ve tried those out!  You are mostly playing your own game with only a few cards that impact the other players.  You can play offensively by choosing a die that you know another player needs, but you have to watch out that you don’t hurt yourself!

I found this game to be fairly easy to learn, deep in its strategy and fun fun fun.  It’s currently at the top of my play list and I can’t wait to play it again!