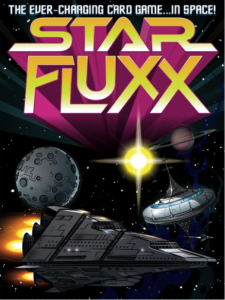 Star Fluxx is a recent member of the ever-growing Fluxx family of card games.  This line of games has featured themes ranging from common (zombies, Cthulu, etc.) to odd (Monty Python and even “stoner” Fluxx).  Each game uses the basic mechanics of the original Fluxx game but brings its own twist.  I have found Fluxx games to be silly fun.  I’m also a huge science fiction fan.  Looney Labs mixed the two up, and I found myself buying a copy of Star Fluxx!

The small box holds only a deck of cards of good quality (think standard playing-cards) and a rules booklet.  The cards come in a variety of categories, each with a different effect on the game.  Action cards, for instance, are simply one-off effects that are played and then discarded.  Keepers, on the other hand, represent the items, characters, and places players are trying to collect to accomplish Goal cards.

Like every game in the Fluxx family, Star Fluxx begins with a very simple rule:  on a player’s turn, she draws a card and plays a card.   While that simple structure remains throughout the game, players will be changing the rules through the play of Rule cards.  These cards can drastically change the nature of the game.  At various times in the game, players might be drawing several cards on a turn, finding themselves with a very small hand size, or changing their already-played Keepers with another player’s!

All of this action takes place in a race to accomplish the Goal cards mentioned above.  The Goals usually specify two Keepers a player needs to have already played in order to fulfill the Goal and win.  For example, a Goal called “City of Monsters” requires a player to have the Alien City and Bug-Eye Monster cards already played in order to win.  However, I have found that this is rarely as simple as it sounds.  I have seen countless moments when I have already played the required Keepers for the face-up Goal and am just waiting for my turn so I can play a card and win.  But just then, someone will use an Action card or play a new Rule card that swipes a crucial Keeper from under my nose.

As you can see, Star Fluxx is often unpredictable and random.  This works both against and for the game.   With the frequent changes of the rules and powerful Action cards, you never really know if you’re about to win or to start again virtually from square one.  Thus the game can be very swingy, and fortunes can change drastically from turn to turn.  However, this is also part of the fun.  The game is generally short and light enough to keep things moving.  A player’s turn is quick and simple, even when many new Rule cards are on the table.  And, of course, the theme in the cards usually makes up for any sour grapes a player might be feeling.  After all, it’s actually kind of fun to lose my “Expendable Crewman” with the terrible case of “Brain Parasites” to save me from a much worse fate!