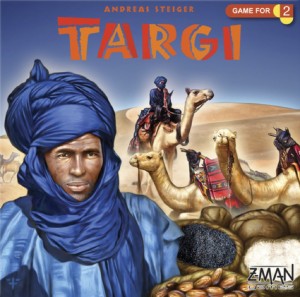 Targi is a relatively new member of the Kosmos 2-Player Line, joining some classics from the past decade, from Reiner Knizia’s Lost Cities to the recently reprinted Babel.  Since my wife is my primary gaming partner, I always have my ear to the ground for good 2-player games, and the Kosmos Line has rarely disappointed.  I approached Targi from this perspective–would it join the ranks of those classics?

In Targi, players represent the leaders of Tuareg tribes trying to scout the desert and claim resources and enhancements to build up their tribes.  This is primarily a card game featuring a “board” comprised of a frame of cards that create a border and a 3×3 grid of cards in the middle.  While the cards in the frame are fixed, this middle portion of the board will be in flux throughout the game, as cards continue to be claimed and replaced from two decks of cards representing Goods and Tribe enhancements.

Each round, players place their three Targi figures on various cards in the frame of the board.  As the Targis take their places around on the board, the players create “intersections” in the middle of the board by drawing imaginary lines forward from where their Targi figures are standing.  At these intersections, players place tribe markers that indicate a wish to claim that card.  Once all Targis and tribe markers have been placed, the next phase begins.

At this point, each player resolves all the cards on which she has a marker of any kind.  This might mean gaining goods, claiming tribe enhancement cards, or even trading goods for points.  Cards claimed from the middle of the board are replaced, thus constantly changing the layout of Goods and Tribe cards.

Ultimately, it’s these Tribe cards that create the real magic of the game.  As players claim and pay for these cards, they place them into a personal display, representing their tribe.  These Tribe cards are worth points, but they also often come with special abilities or end-game scoring bonuses.  In addition, the particular layout of each player’s tribe can gain the player bonus points as well.

My wife and I have played several games of Targi, and I’m happy to say that it does indeed deserve a place among the best of the Kosmos Line.  The game mechanics are simple, but the decisions in the game are always compelling.  For instance, trying to line up my Targis to create intersections on center cards that I really need is often challenging, forcing me to be flexible in my plans.  Or, as I start to build up my tribe, I might desperately want a particular end-game bonus card, but having to pay for that card might mean I have to put off pursuing a valuable Goods card in the short-term.  For me, this sort of tension is often the sign of a great game–I want to do more than I can do at any point in the game, yet all my options are good!