We are thrilled to announce that Sunday July 6 at 4:30 PM we will unveil our new art piece!  From the early planning stages of Meeples Games, we wanted to contribute to the tradition of West Seattle art murals.  We contacted our long time friend from Vashon, the visionary Paul Gasoi – Paul has been working on an exciting new piece that will be on display in Meeple’s cafe.  So please mark your calendars and come by to meet the artist and help us celebrate Cosmic Interstice Chess!

From the Artist:
The piece is a representation of a game being played called Cosmic Interstice Chess.  It’s story involves George Francis Train, upon his return from going around the world in 67 days, hosting a game tournament in West Seattle in 1890.  Train received the game from Lewis Carroll while in England.
About the Artist:
Paul Gasoi has lived and created art in King County for 25 years.  His work has been shown internationally in museums, colleges, galleries and other institutions. Local solo shows in Seattle have included “The O.K. Hotel”, “Form Space Atelier”, “The Belltown Underground”, and on Vashon-“The 070”.  His work is held in permanent collections around the world including Paris, Rome, Brazil and Australia.  He has assisted local Artists such as Dale Chihuly, SeanJohn Walsh, Anne Grgich and Mark Stevens.  His Gallery at 18606 Beall Rd. SW, Vashon, WA, is open every Sunday 1-6 throughout the summer starting July 13th.  More details by calling 206-356-3832 or paulgasoi@yahoo.com 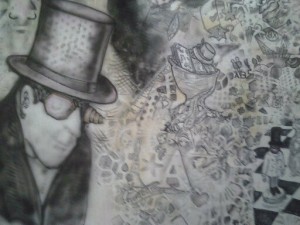 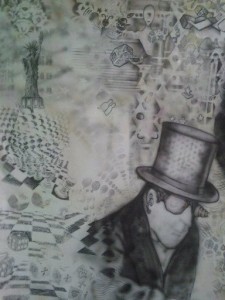