New Games in this Week!

We’ve got some great new games this week that we’re super excited about.

The worlds of Judge Dredd, Sláine, Strontium Dog, and Nikolai Dante will crash together on tabletops in the miniatures board game Judge Dredd: Helter Skelter, which features game-play similar to that of Wildlands, although the two games cannot be combined. The game brings some of 2000 AD’s most well-known characters to the streets of Mega-City One, fighting for the shattered fragments of their own universe! Faction-specific action decks and new special character abilities give each group their own play-style, from the well-armed Judges with their explosive ammo to the bestial fury of Sláine and his Celtic allies. Playing to your faction’s strengths and exploiting your opponents’ weaknesses will be the key to claiming victory on the streets of Mega-City One.

Clank! Legacy: Acquisitions Inc extends the deck-building fun of Clank! with legacy-style game-play! Found your own franchise of the legendary adventuring company Acquisitions Incorporated, and shepherd your fledgling treasure-hunters to immortal corporate glory over the course of multiple games. Your game board, your deck, and your world change as you play to create a unique campaign tailored to your adventuring party. Be cunning, be bold, and most importantly be ready…

In the village of Tiefenthal lies “The Tavern of the Deep Valley”. There, all citizens from the area gather, but it’s important to attract new, wealthy guests for only then is there enough money to expand the tavern, which will then lure nobles into the tavern as well. But which tavern expansion is best? Should you focus on money? Or rather ensure that the beer will keep flowing? In The Taverns of Tiefenthal, the challenge is to skillfully choose the dice and develop your personal deck of cards as profitably as possible. The game is structured with five modules so that your group can add extra levels of complexity as you become more familiar with the game.

In Clue: Dungeons & Dragons, a group of heroic adventurers has been called to the Archmage’s castle, but one of those heroes isn’t who he appears to be; one of the heroes is a doppelganger, a monster that can look like anyone! In the darkest part of the night, the doppelganger kills the Archmage, triggering a spell that seals the castle until the monster is caught. Now, in the grand tradition of Clue, the six suspects must determine which one of them is the doppelganger: Regdar the Human Fighter, Tordek the Dwarf Fighter, Lidda the Halfling Rogue, Mialee the Elf Wizard, Ember the Human Monk or Nebin the Gnome Wizard. The heroes try to figure out Who killed the Archmage, Where the crime occurred, and Which magical weapon was used.

Silver & Gold combines simple rules, fast action, luck, and planning as players try to complete treasure map after treasure map, with the maps being printed on wipeable cards to allow for endless adventures…

The next wave of Star Wars X-Wing kits are here! Now’s the time to convert your “huge” ships to second edition. Epic Battles is a multiplayer expansion which adds a brand new game mode. This mode uses cinematic scenarios that allow 2-8 players to engage in multiplayer battles, field massive fleets and fly coordinated wings of starfighters.

In the co-operative game The Aquicorn Cove Board Game, 2-4 players take on the roles of members of a small fishing village struggling to survive while maintaining a balance with the natural world. To win, the villagers must feed and grow their village, while helping to restore the health of the reef and aquatic ecosystem. The villagers are fortunate, though, and the waters of their cove are home to the beautiful and benevolent aquicorns, as well as the wondrous reef guardian Aure, who can help them both to understand the impact humans are having on the environment and to save the village.

The Crucible is about to be shaken up in Worlds Collide, the third age of KeyForge! In this continuation of the world’s first unique deck game, two brand-new houses enter the fray as 284 new cards are seamlessly integrated into the existing card pool. With new houses come more new keyword abilities and new styles of play to create an entirely new collection of Archon Decks for you to discover, explore, and master.

Detective Club is a board game for players who enjoy party games, with simple rules that take just a minute to explain. Intrigue, sudden revelations, limitless creativity, and tons of fun await you in this game! Lead the investigation as a detective, or cover your tracks as the infiltrated conspirator. Discuss, accuse, object and try to convince everyone. In Detective Club, each round, one of the players secretly teams up with another — the Conspirator — and tries to make them guess a secret word using just two illustrated cards! Other players are detectives, who also know the word, but don’t know the identities of each other. Detectives have to find out who the conspirator is, making sure they don’t get accused by their fellow players!

Your goal is to use the elastic band to quickly launch as many discs as possible through the door slot and into the opposite camp. But beware, your opponent is trying to do it too – at the same time! Boisterous matches are exciting for both the players and the spectators alike. Constructed of solid wood, Fastrack is a fast, two-player game that can be enjoyed by players ages 4 to 104.

Kingdomino – New to the Library!

In Kingdomino, you are a Lord looking to expand your kingdom.  Players bid for tiles (dominoes) and attempt to create swaths of connected land types with at least one Crown.  Points are scored based on the number of crowns in each field.

This game is super easy to learn, fun to play and pretty strategic.  I see why it won!

We’ve added Kingdomino to the game library, so come play it! 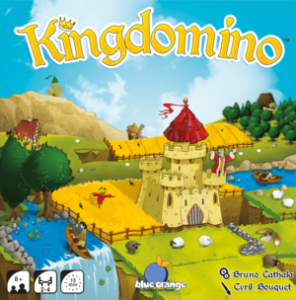 We love the game Fuse which is currently in our Game Library.  It’s fast, fun and cooperative.  Flatline is the next cooperative game from Renegade Game Studios.  In Flatline, you are futuristic emergency room docs with patients to treat.  The power is failing, you have a very short time to treat everyone before the power goes out!  No pressure!! 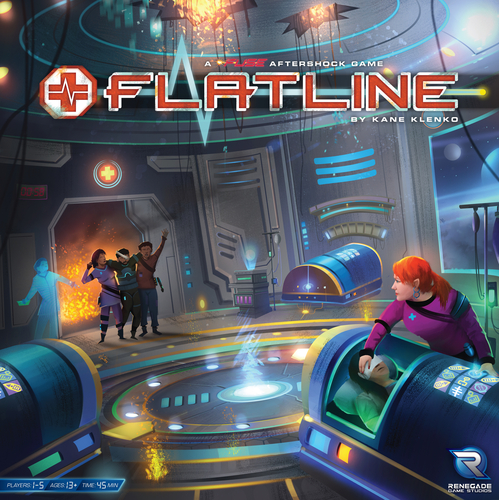 Flatline is new to our game library and has a whopping 7.7 rating on boardgamegeek.com

Check out this review from Geek & Sundry

Did I mention the cool dice?  Lots and lots of cool dice! 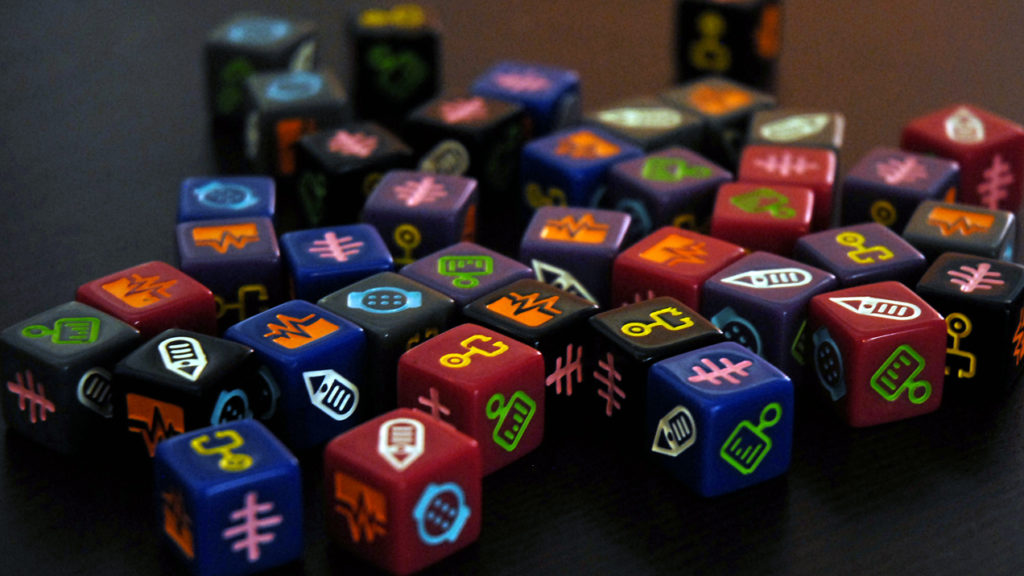