Spooky Games to play on Halloween!

Are you looking for a great spooky game to play for Halloween? We have so many great suggestions just for you!

Based on the award-winning Betrayal at House on the Hill board game, Betrayal at Mystery Mansion is the mash-up fans have been clamoring for! Play as Scooby-Doo, Shaggy, Velma, Daphne, or Fred as you explore the mansion and its grounds, finding clues, encountering strange occurrences, and maybe even catching sight of a monster! When you find enough clues to learn what’s really going on, that’s when the haunt starts, and one player will switch sides to play the role of the monster! Will you be able to stop them before they carry out their sinister plan?

The stakes have been raised. Imagine living in a place so wretched that it’s not plagued by one, two, or even three monsters — but seven of the most horrifying fiends! In Horrified, you’ll come face to face with them all as you work together to rid the town of the maniacal or misunderstood creatures…before it’s too late.

In Villainous, each player takes control of one of six Disney characters, each one a villain in a different Disney movie. In this asymmetrical game, each player has their own villain deck, fate deck, player board, and 3D character. Who will be the best villain amongst you?

Being a witch is all about wielding powerful magical ingredients — but a witch can wield only so much power before everything blows up in their face. Choose your recipes wisely to clear your workbench and stick others with too much raw material because the first player to overflow their nemesis’ cauldron with enough ingredients wins! In Whirling Witchcraft, you start with a hand of four recipe cards, as well as a number of ingredients on your workbench; ingredients come in five types, and you have a limited number of spaces for each type on your workbench.

Zombicide, the board game, has taken the world by storm with over two million copies sold since its release in 2012 and spawning a cult franchise of cooperative zombie slaying all over the world. In Zombicide, zombies are controlled by the game, while players take on the role of survivors who must co-operate in order to survive and thrive in a world overrun by the bloodthirsty undead. Find guns and gear to take the fight to the zombies through 25 different scenarios linked by a branching story as you pick your way through an infested city.

The staff at Meeples Games has put together a list of their favorite spooky games just in time for Halloween! Some of these games may not be in stock at the moment, but we can always order it for you!

Arkham Horror is one of my favorite co-op games. It’s spooky and creepy and you really have to work together to win. One of the more interesting aspects of the game is that your characters can die or go irrevocably insane, forcing you to choose a new person to continue the game as. It is steeped in the Cthulhu mythos and a roaring 20’s aesthetic with an almost infinite amount of replayability due to the plethora of character options and scenarios. If this sounds awesome, check out Arkham Horror Final Hour.

Mysterium is a mystery game where one player assumes the role of a ghost who cannot talk while the rest assume the roles of mediums helping the ghost figure out who killed it. The ghost has seven rounds to supply the mediums with visions, via paintings on cards, that inform them of what killed them, who killed them, and where they died. It can be a struggle as the medium to decipher what the “vision” the ghost sent you is supposed to mean, while as the ghost you can find yourself with a suboptimal set of visions to hand out. I think that is part of the fun and charm of the game.

The goal of Dead Man’s Cabal is to bring the dead back to life and throw a party better than your competitor. Spooky aesthetics and necromancy, count me in! My favorite part of the game is the guest cards; many of them have a likeness to dead celebrities and the art is really nice. I also love the little bone pieces that you use to do rituals, buy runes and guest cards. The only qualm I have is that the rules are a little complicated for such a light strategy game, but that is what Youtube is for.

From the makers of Space Park (another of my favorite games), Campy Creatures is a great quick game with incredible card art! In this game you will play as a mad scientist deploying monsters in order to collect mortals. This game is a really fun and quick. It is also small so it is easy to pack in a bag for travel purposes. There is also an expansion, but I haven’t played with it yet!

Join us for Ultimate Werewolf!

A whisper travels through the village. People are waking up to find their loved ones mauled. Monsters lurk among us, taking Human form in the day, but by night… the WEREWOLF hunts!

Spend your Halloween playing the classic guessing, bluffing, and HIDDEN IDENTITY game, ULTIMATE WEREWOLF here at Meeples Games! Everyone who convenes will be part of the village, and each turn night will fall… and someone will die! The villages must discover the identity of the werewolf – or werewolves – while there are still enough of them left to fight!

Reena will be our storyteller. Are you brave enough to face the werewolfs… or clever enough to survive as one? Join us for this oversized game of Ultimate Werewolf!

Come in costume for a chance to win in our amazing costume contest!

Where: Meeples Games of course

Preregistering is encouraged but not required. Contact us over the phone (206)535-7896, or in person at the front counter! Space is limited!

Please show up before 6pm, as the game will start promptly at 6pm!

Halloween Werewolf was So Much Fun!

We had such a great time on Saturday night playing Werewolf!  In the end, the Villagers were able to sniff out the Werewolves and bring home the victory! 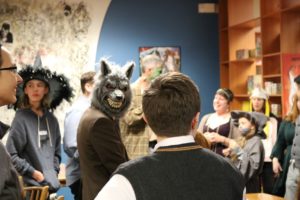 I wonder if that wolf was a Werewolf? 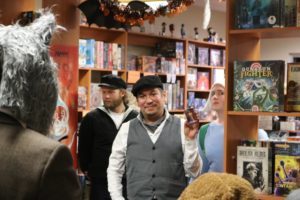 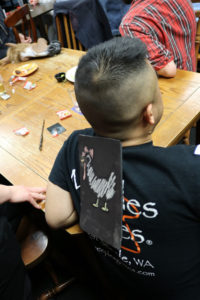 Kenneth was a Chick Magnet 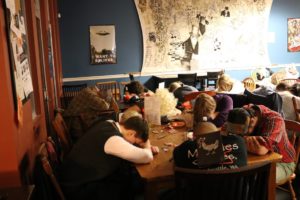 Night in the village 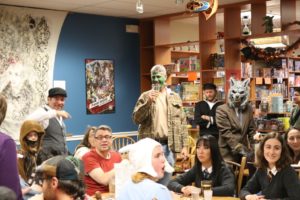 The villagers discussing their options 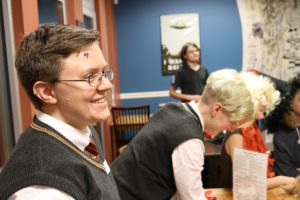 Harry Potter and Draco Malfoy had a great time, too!

The costume contest was great fun with the Centaur, Gandalf and Effie Trinket placing first, second and third! 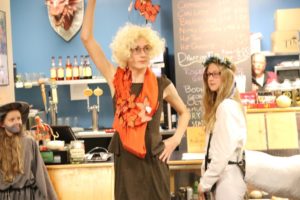 Lauren and Reena were our venerable MCs for the night and did a fantastic job! 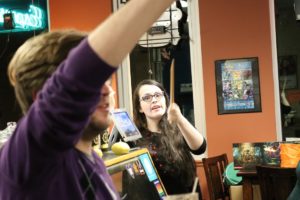 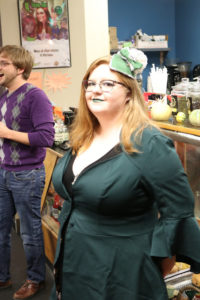 It’s that time or year again!  Meeples Games is happy to announce we’re running Halloween Werewolf for our third year!

This year’s MCs are Reena and Lauren!

Who: Everyone, but recommended 12 and up

We have great fun with this game each year and can support up to 40 players.

Will you survive the night?

The Village is your mission:
You will attempt to save it or destroy it.

One minute you’re a Villager, defending your theoretical home with every fiber of your being. The next, you’re a Werewolf, framing your friends and accusing them of wanting to destroy your village, when really it’s you who’s been infiltrating it all along. Each game becomes an epic phenomenon, designed to test your personal judgement and moral character. 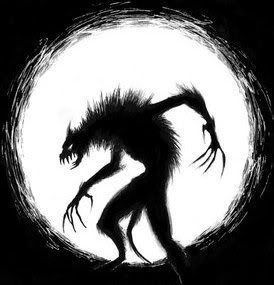