Hey y’all.  If you haven’t heard of Star Wars Destiny, it’s a new 2-player collectible card and dice game by Fantasy Flight Games.  It came out in November to much fanfare and it has not disappointed!

In the game, you build a 30 card deck with Characters (Rey and Han Solo or Darth Vader and a Storm Trooper for example) and cards with upgrades or events or vehicles to support those characters.  You can be villains or heroes or neutral.

The art is great, the dice are cool, the deckbuilding is engaging and the gameplay is FUN!

The starter sets and the booster packs have been very hard to get thus far, but that seems to be changing – yay!  The street date for the latest restock has been moved up (!!) to Friday 1/13!

And, a new set has been announced – Spirit of Rebellion – which will include cards such as Jyn and Palpatine!  Pretty exciting.

We’re playing on Monday nights, so drop in and check out this great game!

We finally got our copies of Star Wars Destiny, the new two player collectible card and dice game from Fantasy Flight Games.  I learned how to play it yesterday (it only took 15 minutes) and have been playing non-stop ever since!

This game has so much going for it!  First, it’s not expensive.  A starter set is $14.99 and includes all the cards you need to either play Rey or Kylo Ren, the dice, a short instruction sheet, all of the tokens you need and a nice sheet to track all of the cards in the set.

Second, it’s easy to learn. We were up and running in 15 minutes and other than a few references to the instruction sheet, I’ve been able to teach others to play in just a few minutes. 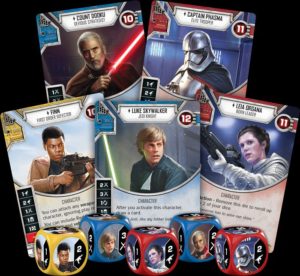 Check out the art and the dice!

Third, it’s easy to play while being in-depth enough to be interesting to an experienced gamer.  In this game, each player takes one action from a possible six actions and then it’s the other player’s turn.  There are no super complicated interactions between cards that make it overly complicated.  You roll a character’s dice, I play a card, you take the action on a card, I attack, etc.

Fourth, the dice are cool. The dice are large with full four color pictures on them.  And those pictures are not stickers, they are printed on the dice and then coated so there is no possibility that the picture will scratch or come off.  They have good heft and roll really nicely!

And finally, it’s STAR WARS! We’ve been waiting for a cool, fun, approachable Star Wars game and now we have it.  X-Wing is an amazing game, but it’s less than approachable for kids, families and casual players.  Destiny scratches that Star Wars itch and is fun and easy.

Come out on Saturday night 11/19 at 6:30 to get in on the action before the Star Wars Destiny officially releases.  Buy a starter set (limit one per player), play in a game and get cool promos and the option to pick up booster packs.