Are you searching for the perfect holiday gift for everyone on your list? We have compiled a list of 25 amazing games that are sure to fit each person on your list.  Most of these games can be borrowed from our library, so come in and try a few and pick up your favorites.

This 2 player deck-building game is the perfect game for anyone who likes light strategy.  In this game, each player takes turns building the perfect deck to combat the other player. Purchase ships, space bases, and outposts to protect yourself from your opponent. Each game takes about 20 minutes to play.

Goatfish is the perfect family game. This spin on Go Fish, was designed by a West Seattle father and daughter team. Much like Go Fish, each player takes turns asking for a type of goat. But make sure to protect your herd, because opposite players can possibly steal them. This game is perfect for 2-4 players and takes about 20 minutes to play! Do you have any fainting goats?

This fast and fun dexterity game is sure to keep everyone thinking about the warm summer weather! 2-4 players race to flip their swimmers into the bouncy pool, as soon as the youngest play yells “CANNON BALL” the race is on.  The first player to land 3 swimmers into the pool wins! But make sure to get your swimmers completely into the pool, because other players can knock them out. 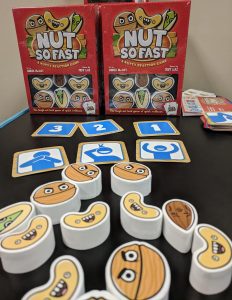 You gotta be lightning fast in the wildly nutty party game (3-6 players)! Flip two cards and watch for exactly four matching nut pictures. If you see a set of four, grab the nut token with the same face right out from under other player’s noses! But “nut” so fast because if a number card appears, players instead need to strike the correct nutty pose. Nut So Fast is great for ages 8 and up. Fun for the whole family! Who can strike the nuttiest pose?

Another great party game that we carry is Superfight. This 3-10 player game is all about super powers and super problems.  The game encourages lively debates with your friends about ridiculous fights. Who’s got the best character to win?

This game is a complex and thematic co-op game about defending your island home from colonizing Invaders. 1-4 players are different spirits of the land, each with its own unique elemental powers.

In this 2-4 player game, players take turns drafting colored tiles to their player board. Later in the round, players score points based on how they’ve placed their tiles to decorate the palace. Extra points are scored for specific patterns and completing sets; wasted supplies harm the player’s score. The player with the most points at the end of the game wins. 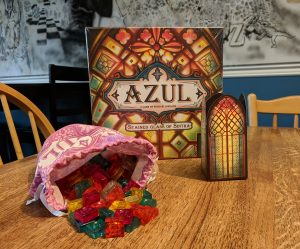 This sequel to Azul, challenges 2-4 players to carefully select glass panes to complete their windows while being careful not to damage or waste supplies in the process. The window panels are double-sided, providing players with a dynamic player board that affords nearly infinite variability!

In this dice drafting game, 2-4 players will use the tools-of-the-trade to carefully construct a stained glass window masterpiece. Each stained glass window is “constructed” by building up a grid of dice on their player board. Each board has some restrictions on which color or value of die can be placed there. Dice of the same value or color may never be placed next to each other. There is also a 5-6 player expansion available!

This 2-4 player game is an area control and set collection game in which players manage a group of settlers spreading out over the islands of a newly discovered archipelago. This is a great game for players 8 and up with light strategy.

This abstract, family game plays 2-4 players plays much like Tetris, where spacial awareness is key. Numbers don’t count for much unless they are off the ground floor. The game includes twenty cards numbered 0-9 twice and eighty tiles numbered 0-9. After shuffling the deck of cards, draw and reveal the first card. Each player takes a number tile matching the card and places it on the table. With each new card drawn after that, each player takes the appropriate number tile, then adds it to the tiles that they already have in play, with each player building their own arrangement of tiles. This game can be played out of the box for easy clean-up. 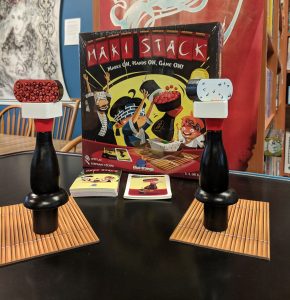 Order’s up, so it’s time for a sushi showdown! Balance and arrange the sushi, plates, and soy sauce bottles, and make sure to execute the order exactly as shown on the card. Be careful because one wrong move and everything might tumble over!

Use your fingers as chopsticks to stack pieces, or play in team mode, with each teammate using only one hand and one finger. Maybe you’ll play in blindfold mode, with you guiding your teammate as they blindly build the tower of sushi.

Be the fastest solo chef or culinary team to master the art of sushi stacking and win! Maki Stack is playable by 2, 4, or 6 players.

This is an expanded version of the best-selling card game Sushi Go! This game is a party platter of mega maki, super sashimi, and endless edamame. 2-8 players earn points by picking winning sushi combos, but now you can customize each game by choosing à la carte from a menu of more than twenty delectable dishes. What’s more, up to eight players can join in on the sushi-feast. Let the good times roll!

Relive the glory of New York City in the early 1900s, in this game 2-4 players are building skyscrapers on a map of New York’s Financial District. Players take location cards from a card’s display and then use 2-3 of those location cards to place Tetris-shaped building tiles on the board. They first build bronze level buildings. Later in the game those buildings can be replaced by silver level and gold level buildings.

In this co-op game, several virulent diseases have broken out simultaneously all over the world! 2-4 players work together as disease-fighting specialists whose mission is to treat disease hotspots while researching cures for each of four plagues before they get out of hand. Will you and your friends save the world? 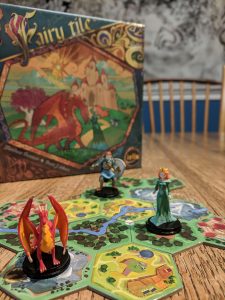 Welcome to the magical lands of Fairy Tile, where a daring Princess, a devoted Knight, and a dreadful Dragon roam looking for adventure. They need your help to discover the kingdom! Help them move further and further to fulfill their destiny and tell their story, page after page. Develop the kingdom by putting new land tiles in play and moving the Princess, Knight, and Dragon across different places such as mountains, forests, and plains.

This game is much like dominoes but with a kingdom building twist. Each turn, connect a new domino to your existing kingdom, making sure at least one of its sides connects to a matching terrain type already in play. The game mechanics for obtaining the tiles is clever: the order of who picks first depends on which tile was previously chosen. Make sure to secure tiles with crowns- these royal treasures help to multiply the worth of your kingdom at the end of the game! We also carry Queendomino, as well as Kingdomino: Age of Giants!

In this game, 3-8 players bet on five racing camels, trying to suss out which ones will place first and second in a quick race around a pyramid. The earlier you place your bet, the more you can win — should you guess correctly, of course. Camels don’t run neatly, however, sometimes landing on top of another one and being carried toward the finish line. Who’s going to run when? That all depends on how the dice come out of the pyramid dice shaker, which releases one die at a time when players pause from their bets long enough to see who’s actually moving!

This historical boardgame where 2-8 players face-off in stylized battles of some of the most famous historic battles of World War II including Omaha Beach, Pegasus Bridge, Operation Cobra and the Ardennes. Memoir ’44 includes over 15 different battle scenarios and features a double-sided hex game board for both beach landings and countryside combat. Each scenario mimics the historical terrain, troop placements and objectives of each army. The game is great for players 8 years old and up! 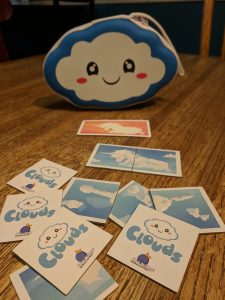 Clouds is a matching game that was made for the wildest of imaginations. 2-5 players turn over a card and quickly search to find the cloud halves that complete the picture. Be the first to find them, and win! Race your friends, or take on the challenges solo.

Before There Were Stars

This 3-6 player storytelling game has each player tell the mythic creation story of “their people”.  Inspired by constellation cards, players craft tales about the creation of the world, the origins of civilization, the rise of a great hero, and the end of days. Playing this game is a breath of fresh air that never repeats itself, except in the fun and warmth of emotion it brings to your table.

This is a simultaneous drafting card game. Each turn, 2-5 players draft five units that they then recruit into their kingdom — assuming that they can pay. These choices determine the players ability to shine in battle, generate great income, construct dominant buildings, and earn legend points. This game is a lot of fun, with easy to understand rules and beautiful artwork, it’s sure to be a hit among your friends and family.

3-5 players play as children, representing a village, and face opponents in a joyful competition around a marvelous tree. Anticipate other players’ moves and guess their intentions. Be crafty, collect strange fruits, and dodge the snowballs! Fruits appear randomly on the board at different levels of the tree. The players will try to seize them and therefore will have to choose on which branch they want to climb. Be careful though, a player will only be able to harvest fruits if he is alone on a branch, and if there is not a player in ambush just above him!

This classic 2-4 players Euro-style game introduces an innovative new dice mechanism in which the dice players draft each round are used in multiple different ways and have an impact on many aspects of their decision making. While there are many paths to victory, players should always seek to optimize their opportunities with every roll of the dice. Combined with ever-changing synergies of the citizens, expeditions, and monasteries, no two games of Coimbra will ever be the same! 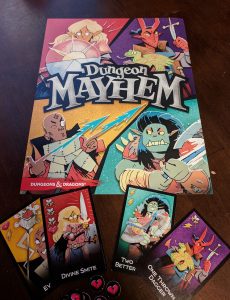 In this easy-to-learn 2-4 player card game, a party of adventurers are pitted against one another until only one of them remains to claim the treasure. The game includes four decks of cards to represent Sutha the Skullcrusher (barbarian), Azzan the Mystic (wizard), Lia the Radiant (paladin), and Oriax the Clever (rogue).